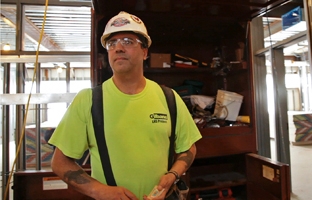 I think the members understand especially now when times are so tough. A lot of them are hurting too but they understand that people are hurting more than them and they really wanted to help out.

Joe Rapoza, Local 336, was voted Steward of the Year by his Local.

“Brother Rapoza has continued to excel as a steward,” explained Jason Garand, the Business Manager for Local 336.

A steward is union member who is appointed by the Local Business Representative to ensure that the contract is being adhered to by both contractor and carpenter. The steward acts as a liaison between the workers and management if a dispute arises. The steward is a working carpenter who has been trained to recognize safety hazards and will assist the contractor to provide a safe and healthy worksite. Because stewards are the second person hired and second to last to be laid off, they typically posses a high skill level in all aspects of the trade.

"The Steward of the Year award is a way for us to celebrate a member’s accomplishments,” notes Garand.

The award recipient is chosen by the leadership of Local 336, which is comprised of Local staff and Executive Board members, with input from rank and file members. Some of the things examined when nominating a member for this award include: the individual’s skill sets; understanding of the contract, by-laws and UBC Constitution; and interpersonal communication skills, which are an integral part of being able to manage the various situations that arise on a jobsite.

“Being a steward on the job you try to keep the guys motivated, keep the morale up…it’s about having a nice place to work, that’s what we all want is to work in a nice environment,” said Rapoza.

When asked about his response to getting this award, Rapoza was humble and credited his Brothers and Sisters for making his job easier.

“The carpenters that are working on this job make my job as a steward a million times easier. They all like what they’re doing; they have a good time...”

While he admitted that receiving the award was “a very big honor,” he seemed to feel more comfortable speaking to what he likes about working as a carpenter.

“I enjoy doing what i'm doing…the finished product is nice. You come here it’s a big pile of dirt and a year and half, 2 years, maybe, it’ll be a beautiful building and I’ve had my hands in all of it.”

Oops! It looks like you made a mistake, something has gone terribly wrong.