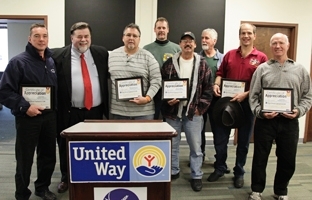 The Carpenters Union has been really instrumental in not only providing us with the labor and the expertise, but they've also really connected us with resources. This has been such a value to us.

Volunteer carpenters were an integral part of a United Way project in Framingham, MA, transforming the former Framingham RMV Building into the new United Way Pearl Street Cupboard and Café. The facility is capable of serving more than 1,000 customers a month.

Representatives from the United Way reached out to Carpenters Local 475 for help renovating the 4,000 square foot space located at 10 Pearl Street in Framingham. Understanding all too well the growing need of families in their community, the carpenter volunteers were eager to step up.

The remodel included 4,000 square feet of new ceiling grid and three styles of ceilings. Carpenters built new walls and door opening, installed 200 sheets of drywall and wood blocking and put up three coats of taping. Work also included doors and hardware, including two exterior doors. An emergency exit door was cut out through block wall. They also helped coordinate the donation of various building materials for the site.

Along with local Union Laborers, members of the Carpenters Union volunteered an estimated 3,000 hours on the project.

While the United Way supports various food pantries across the region, this is the first one it directly operates. The United Way is committed to making people feel as comfortable as possible, recognizing that many families may find themselves using these services that they never imagined they would need.

The facility offers a restaurant-like atmosphere for the hot meals dining area and there is a section of the food pantry that allows people to shop for their own produce, like they would in a grocery store.

Although the facility is fully operational, the need for volunteers to help in the United Way efforts has not gone away. To learn more about the Pearl Street Cupboard and Café, and how you can help, click here.

A special thanks to the following members and signatory contractors who donated time and materials to this project: