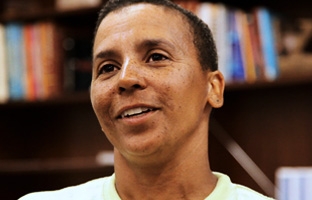 To this day the decision to become a carpenter remains the single best decision I have ever made in my life.

Cheryl’s career with the Carpenters Union began in 1990 when she joined Local 218 as an apprentice. She had finished art school, but was looking for something more. She had always wanted to work with her hands, but had been discouraged by her father in high school when he told her ‘girls don’t do that,’ after she showed interest in a shop class. After a conversation with a woman who had joined the Carpenters Union, Cheryl decided to take a chance and pursue the opportunity to work in a field where she had been misled to believe she did not belong.

“To this day the decision to become a carpenter remains the single best decision I have ever made in my life. I got so much from being a carpenter. It’s not just a job, which is what I thought at the time. I have realized over the course of my career is that there are a lot of opportunities.”

Cheryl has taken advantage of these opportunities, working as a foreman, superintendent and part-time training instructor during the course of her career.

She is proud looking back at her career and seeing all she has accomplished. “I’m very grateful to be a union member. It has challenged me in ways I have not been challenged before.”

At 5’2”, Cheryl is quick to debunk the stereotype that carpentry is a job for men, specifically those who are large in stature. “I really enjoy the fact that I’m so small and can compete in a productive way with my much larger male counterparts….there’s a place for everyone here in the Carpenters Union.”

“I remember when I first started I was a little bit timid just because I was uncertain of my surroundings, but now I’ve sort of developed this attitude that I’m a force to be reckoned with and I enjoy that on the jobsite.”

Favorite part of being a union carpenter: “I love being a carpenter. I always take pride in the things I’m building. When I drive around, especially with my family, I love to point out the buildings I have worked on. It’s a wonderful feeling to know you’ve been a part of city’s transformation; I take tremendous pride in that.”